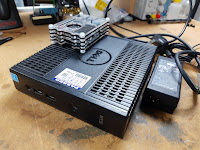 With the arrival of more Kinects I need to get back to mounting a computer on the rover in a better way than just cable-tying a Raspberry Pi to a cable-tie base. It was rattling round like a mad thing outdoors which was just generally unsatisfactory.

Having read up a little on ROS I came to the conclusion that I needed a more powerful computer than a Pi 3B+. The Kinects chuck a lot of data at USB, the Pi3 hangs everything off USB and poor performance of USB peripherals is a standard Pi thing. If I want to try the Xbox One Kinect it requires USB3 which the Pi3 simply doesn't have. However with the ongoing chip shortage you simply can't buy things like Pi 4s or Jetson Nanos easily.

To get something with a bit of grunt and more memory without breaking the bank I took a leaf out of Colin Hickey's book and bought a used thin client from eBay. This one is a Dell Wyse 5060 which gets you an AMD GX-424CC quad core 2.4Ghz processor, 4GB RAM, USB3 and a tiny 8GB SSD for £37 delivered. A quick rummage in my box of PC parts and I found another SODIMM so it's now sporting 8GB of RAM. There's a well know pre-set password of 'Fireport' on the BIOS and once you've cleared this you can wipe the SSD and install any desktop OS you fancy. 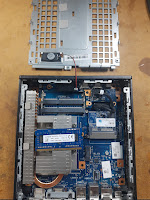 Ubuntu 20.04LTS, the main supported OS for the final release ROS 1 'Noetic' fits on the 8GB SSD fine although I can imagine running out of space at some point. The SSD fitted is a weird stubby SATA thing plugged directly into the board but apart from the physical form factor it seems it's otherwise standard SATA. So if needed I can make an internal cradle and connect a standard drive with SATA cables.

It's a really nice little machine. I booted a LiveUSB of the Ubuntu desktop and it's really quite nippy for the basic specification.

Being a thin client the case has proper mounting points for both a VESA mount and a desktop stand. It just fits on the deck of the rover and I can see myself using the VESA mount for this. It's fanless and DC powered with a ubiquitous 19V laptop style supply and I should be able to use a buck convertor to get that from the rover's 36V battery pack easily. Physically it's about 5-6 times the size of a Pi in a case but given the scale of rover I'm building this isn't a big deal.

The only concern is this will use a lot more power than a SBC like a Pi or Jetson but it is far more efficient than a full desktop, it's effectively laptop style components. It's missing the optional WiFi adapter but I'm not bothered by that. I've got some USB ones and with six USB ports on two separate buses that's not going to kill performance for other things.

I'm really impressed with the build quality, silence and compactness of this little thing, it's almost tempting to replace the hulking ancient desktop I use in my cellar workshop with another Wyse 5060 the same. I'm not even sure it'd be any slower.