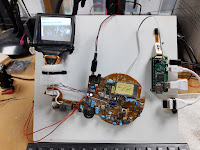 I've been tempted for some time to do my planned updates to the Chindōgu, adding sound and more importantly, trying to throw together some code that avoids using Ekiga in the graphical desktop. The Pi Zero really struggles running the desktop and graphical applications but is fine when throwing stuff straight at the framebuffer.

Some research suggests it's possible to spin up OMX player wrapped in such a way it'll play a network stream straight from a camera and I'm going to try and use that for the video at least. 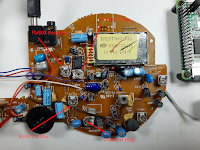 Coincidentally, there's currently a Hackaday retro competition and I think this could make an acceptable entry, if I get the software together and have several all talking to each other. I've accumulated multiple Sony Watchmen and Pi Zero Ws to do the build with.

To get started I've pinned out the main components on a board as it's otherwise hard to work on. One thing I want to do is get the image as decent as it can be and these horizontal gun CRTs were always dodgy.

Lacking a service manual I've worked out the function of the trimmers by trial and error.

Tweaking the framebuffer settings on the Pi Zero and tweaking these has made the display almost usable. With is set to 320x240 you can actually read the command line.
Posted: Thursday, May 06, 2021