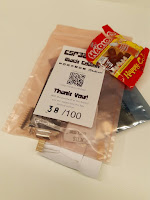 There's been a ton of work done by various people to make the ESP32 do things nobody ever really expected. One of those is to output quite decent VGA video.

In principle this is done with just some resistor ladders but building a board to do this is a bit fiddly so I've just picked up one from Bitluni on Tindie.

I don't have an immediate use for this but the vague plan is to use it as some kind of display interface that speaks to my mesh network kit. Connect a PS/2 keyboard and you've got a terminal device based on a microcontroller, rather than using a Raspberry Pi as a bit of middleware and this appeals to me greatly.
Posted: Thursday, November 14, 2019