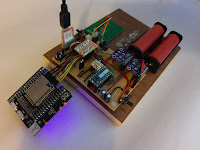 After generating some good data on power use of the ESP8285, I've finally got around to sticking an ESP32S2 into the same board using a hand-soldered adaptor based around a programming board. The board has LEDs on but I can probably account for this extra load. Mostly I want to know a rough equivalent power usage.

With a little tweaking of the code it runs fine, so I'll conduct a charge test over 24 hours and see what the graphs look like. If it's promising I may be migrating the project to an ESP32S2 because of the extra pin count and resources. Squeezing an SD card slot in along with the connections to the charge controller uses almost every usable pin the ESP8285 has.

Also, while I don't want to include a USB FTDI chip on the board, a spot for an OTG USB connector is another matter as by itself it uses no power. It would allow my board to also run CircuitPython, which is quite popular and were I to stick some on Tindie broaden interest I think. It's also a nice 'desk charging connector' and the 5V could go straight to the charge controller. The added component count would only be the socket itself and a resistor I think.