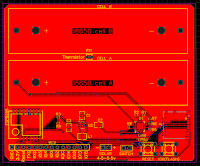 After over two weeks continuous running my first prototype of the solar charged prototype proved itself with a 2W panel. So I spent a chunk of time designing the next iteration in EasyEDA and ordered five PCBs from JLCPCB in China.

I've taken a small gamble with this design as I haven't built it on breadboard first and have added a number of new features.
This is quite a simple project compared to the people making their own small board computers or things based on FPGAs but it's only my second ever manufactured PCB. All the pins on the ESP8285 board are in use, although in principle IO0 which has a button attached for putting it into programming mode could be doubled up with for something else so long as it defaulted to a pullup.

Instead of going straight to the final run of boards I'd like to test these five before ordering more. I made absolutely no effort to keep it compact so even if no changes are needed I'll still move things around and tidy it up before the final order.

Once these arrive I'm hoping the extra efficiency of the PAM2301 regulator will make a 1W panel viable in the UK but if not, 2W panels aren't overly huge.
Posted: Sunday, June 07, 2020