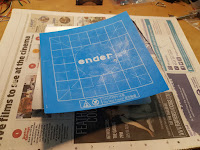 I'm still down the prop mines so can't post much without spoilers, but as alluded to I've been doing a lot of  3D printing again recently. The Ender 2 is great but the bed material was getting nasty and it's always been a pain to get things off as it's not removable. 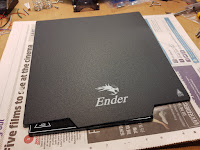 My Ender 3 has a basic removable, flexible bed which is so much nicer. You can't get Ender 2 removable beds easily but you can for the Ender 3, very cheaply. This is a magnetic one which avoids any clips and as I have a second I may upgrade the Ender 3. 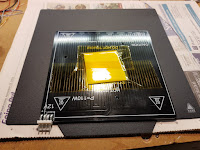 I assumed the bed would cut down easily to go on the Ender 2. Which has a tiny bed compared to almost any modern printer. I popped the bed off the printer, which is dead easy, marked it out with some tape and it cut easily with a nice sharp craft knife. 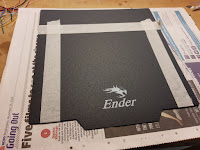 You can see how small the Ender 2 bed is compared to the not huge Ender 3. I wandered a tiny bit with the craft knife despite running it against as steel edge, but once on the printer it's not a problem as you'd never deliberately print that close to the edge of the bed. 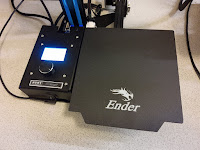 Just running off my first test print now but after some faff re-levelling the bed, which is tiresome on an Ender 2, things look very promising.

Update: The small surface area makes for quite weak attraction with the base. Tall prints, especially, seem to cause the bed to slip and kill the print. I've fixed this with a couple of clips. So I've still got a removable bed it's just not an instant off one. Which is not exactly a hardship.
Posted: Sunday, March 08, 2020