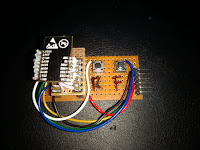 For the boards I'm planning on building I'm going to shift to using ESP8285 modules instead of ESP8266.

The main reason is the integrated flash and the secondary one is it's smaller, with more usable pins than an ESP-01S in less space. I'm not at all space constrained for the first iteration of my project but I will be for later items.

Nice as these are they're really designed for surface mount use so I had to build a little breakout to work with the handful I bought to test with. It's a bit rough and ready but works just fine.

A side effect of the integrated flash memory is you don't need to mess about with pulling pins high to boot. You just need to pull GPIO0 low if you want to program it. I put a couple of buttons on my breakout, one to reset and one to hold GPIO0 low, making for easy programming.

I did a little test with this and my mesh code works perfectly. Another bonus is these chips seem to use slightly less power, ~70mA instead of ~80mA for the ESP-01S. Some of that will be the lack of LED indicators but it's welcome nonetheless on a battery powered project.
Posted: Wednesday, June 26, 2019