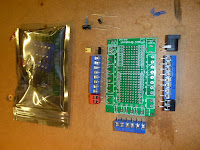 I'm a big fan of the Wemos D1 Mini and Mini Pro as the basis of microcontroller projects.

They're cheap, the ESP8266 chip is powerful and can be used with several development environments/languages. You can program them in C/C++ with the official Espressif SDK, but also the Arduino IDE where support is excellent. They'll also run more modern interpreted languages like MicroPython and Lua, again with good support if some memory limitations. 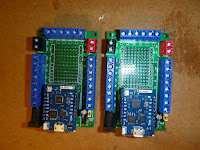 Most of the time, people consider ESP8266 boards for IoT type projects but you don't have to use the WiFi, it can be switched completely off and at heart they're a 80/160Mhz 32-bit device with enough GPIO to handle many small projects. About the only thing they suck at is low power/sleep which is poorly implemented by comparison with other modern boards.

What they do lack is such a large ecosystem of 'shields' and breakouts. Wemos make their own but they're all a bit 'Arduino sensors 101' type things.

I saw these chunky screw terminal breakout boards mentioned on Twitter and while I have no immediate use for them I picked a couple up because I know they'll be great for prototyping stuff.
Posted: Saturday, April 13, 2019