I wanna introduce you to a personal friend of mine 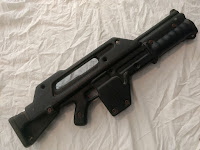 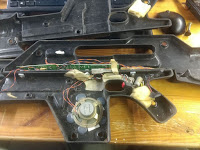 Some time back, a friend who was giving up Lasertag LARP was getting rid of a bunch of their old kit. Amongst it was this 'Pulse Ranger' shell, made by some enthusiasts years ago who started up a small business to give people what quite a few wanted at the time: Pulse Rifles.

I've wanted a Pulse Rifle ever since I started sci-fi LARP so when he thrust this into my hands I was overjoyed. I had considered taking one of the 3D models there are kicking around and trying to turn it into something 3D printable on a normal hobby printer and with spaces inside to use, but that's a mountain of work.

These shells are very thick blow moulded ABS and tough as hell so it's weathered the years brilliantly. They're not perfect replicas but ape the silhouette very nicely and with a bit of work it should fill the gap I have in my set of Lasertag weapons. 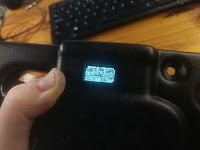 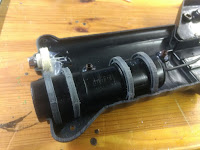 Inside the shell were the remains of an old Lasertag circuit. It was an old board from an original Starlyte and looked a bit sad so I decided to scratch build a new set of electronics inside. This also gave me the chance to make a modern DoT weapon that does multiple hits and the grenade launcher is a nasty thing.

Also back in 1986, having an LED ammo counter on the side was pretty much the definition of cool. So it had to have something like that too. Nowadays we have so much cheap and useful tech around that sticking a little OLED display in is trivial.

With an OLED in there it opens up the option to display more stuff than just the ammo counter and I've been vaguely toying with the idea of having a UI in a 'tag weapon to select different sounds and so on. This will now be my test bed for that. 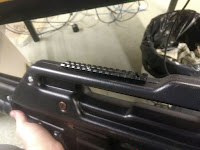 The shell doesn't have any meaningful mounts inside for the lens unit, so I 3D printed some spacers that hold it in the 'grip' section snugly when you screw the shell together. I epoxied it to one half of the shell, did it all up and left it overnight, making it rock solid. With no datum lines and the shells being somewhat flexible it's impossible to guarantee it's straight so I'll have to adjust the sight rails to suit once everything's together.

Then it just became a case of bashing all the wiring together, I already had one of my scratch built gun boards. Working with it reminded me that I really really should standardise it and get some proper PCBs printed, given how cheap it is, but one gentle weekend of faffing about and I have a Pulse Rifle.

There a great body, I used one for a long time before I sold it to try and free some space in my armoury..