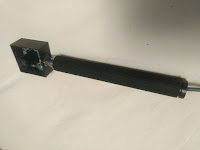 I think I got intimidated by having to finish off what I was documenting before doing anything new. After a few months passed my enthusiasm about writing up something complicated that was well in the past faded. I may go back to it but don't hold your breath. So here I am with a really quick and dirty tool/prop. 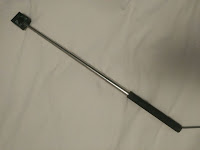 I was away this weekend for a Sci-Fi LARP where I was playing an engineer investigating the return of a mysterious lifepod.

Amongst the players there was a fair chunk of tech kicking around even if it wasn't desperately necessary for the game. I dragged along a mountain of tools including a tablet with endoscope camera.

There were a few hours to kill on the day before the game and I decided to make a 'periscope camera' to complement the endoscope. The ubiquitous cheap USB endoscopes work OK but are fisheye devices focused at a very short distance for working in very small spaces.

This is the guts of a conventional webcam stuck on the end of a cannibalised Poundland selfie stick. It works great for looking over, under or behind things that are a pain in the arse to get over under or behind.

The webcam was one of 'XBox Live Vision' cameras I bought in bulk for a pound each a while back. These are basic but use the standard UVC webcam driver so work with almost anything.

I removed the IR-cut filter and with no casing in front of the board the green LED telltale lights provide some illumination so it's not too terrible in very dark spots. If I feel enthusiastic I'll make another with IR illumination, but this was a quick and dirty, no soldering allowed hack.

I think it will be useful. Tomorrow I'm taking it to work so I can use it inside a congested ceiling space and have a look round for a cable route.