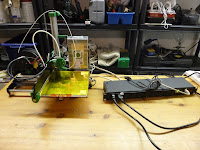 I have bought myself a 3D printer. I'm quite excited about this but I've not done much beyond assemble the kit, learn how to use it and produce a pile of test prints. There will be more on it later when I've used it to help with a project.

It's become obvious that it takes a very long time to print things but the PSU and cooling fans whir continuously whether it's running or not.

I've also experimented with some time-lapse videos of printing, which while fun need me to leave the light on in the cellar.

Being able to switch all this off after it's done, especially if I've left it going while I'm at work, begs for some kind of home automation setup.

A friend showed me some LightwaveRF kit which is nice and I almost threw a pile of cash at it.

Then I remembered I picked up this rackmount PDU that a customer at work abandoned a few months ago. I didn't have the logon details and making it usable meant building a custom serial cable so I could do a reset from the console. An evening's faffing about and it's on my network ready to get used. An added bonus is I can use it to monitor power use should I be so inclined. It's quite a pricey piece of kit, so I'm surprised it was abandoned.

We're also chucking out a load of IEC-IEC mains cables at the moment so I'm going to snaffle up a load of long ones to use with this, either as is or modded to drive lights etc.