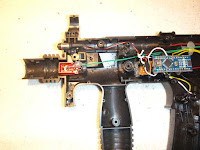 I built two cheap and cheeful MP5 'tag guns earlier this year and left them unlensed. Having done the quickest, dirtiest thing I could when building I left the original muzzle flash bulb in place and stuck the emitter where they originally had cheapo laser pointers fitted.

Sadly the range was predictably awful and they've not got much use as a result. 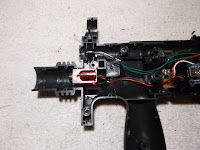 These gun bodies both came with faux suppressors that slide on the end of the barrel and now all I need to do is put a lens a suitable distance down these and it'll make for a basic lens unit. I'll probably leave it removable for easy transport.
Posted: Sunday, November 15, 2015